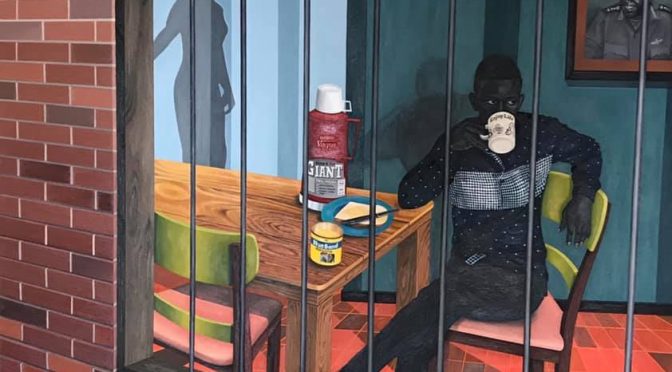 Last summer I spent 6 weeks in Uganda and had the pleasure to meet artists in their studios in Kampala. I wrote a column about it in Tableau Fine Art Magazine, in Dutch… Read PDF of the article ‘Art in the Pearl of Africa’ here. The Ugandan artists and their work are described below.

Andrew Arim – Power, Status and Play
Andrew Arim makes large lifelike oil paintings with lion heads on human bodies. They are men who wear officer uniforms, fancy suits or papal clothing. Arim: “The lion is the king of the jungle, the head of the food chain. Mighty men behave exactly the same way. They want to control everything and often behave hypocritically.”In his work, he questions authority, power and control in Ugandan politics, religion and society. He is currently working on a new series What They Want about Ugandan children and their dreams. Arim explains that children are also concerned with power and status. They want to become a child soldier or star soccer player or emigrate to America; the beginning of the African brain drain. But of course they just want to play in the first place …

Ocom Adonias works in the same studio. He is surrounded by sheets of newspaper on which he makes charcoal drawings. In the series Who is your Saint? he draws people who are often looked down upon or whose professions are taken for granted, such as street vendors, motor taxis and street musicians. He celebrates their existence and paints a picture of everyday life in Kampala. Adonias: “They are my saints.” In the same series, he examines the role of China in Africa. Adonias: “China seems to be Africa’s new husband. We worship China as if it were a saint, but China causes a slow death.”

Ian Mwesiga – Storytelling
On the greenest hill of Kampala, Ian Mwesiga is working on large figurative oil paintings. His mission is to tell stories that have not been shown so far. A narrative of a progressive black population in the spirit of today’s Uganda, after colonialism. His work is full of references to (art) history and contemporary life. In one of his works, for example, a casual dressed black man sits at the table with a thermos jug and a jar of Blueband butter next to him. Behind him a painting hangs on the wall, if you look closely you can see that it is a portrait of the late dictator Idi Amin.

Hellen Nabukenya is trained as an artist and fashion designer. She makes large textile installations from textile off-cuts in Kampala that resemble tapestries. She works with underprivileged women and explains: “They learn a skill to earn money independently. It is also a place where they dare to talk freely, which is a taboo in Ugandan society.” The installations of Nabukenya are exhibited worldwide, with the audience sitting on the immense carpets and getting acquainted with the stories of Ugandan women through video and audio. Nabukenya wants to illustrate how much is required of a woman and that she can break easily and lose her identity.