An exhibition with paintings, installations and a short film by three Senegalese artists: Abdoulaye Armin Kane, Piniang and Khadidiatou Sow. They reflect on complex, present-day socio-economic and political questions on the African continent.

What is the nature of the African Dream and what role does migration play? What is the role of power and what drives young Africans to risk their lives in search of an unknown future?

These artists aim to create awareness and provoke dialogue and engagement with these pressing issues. 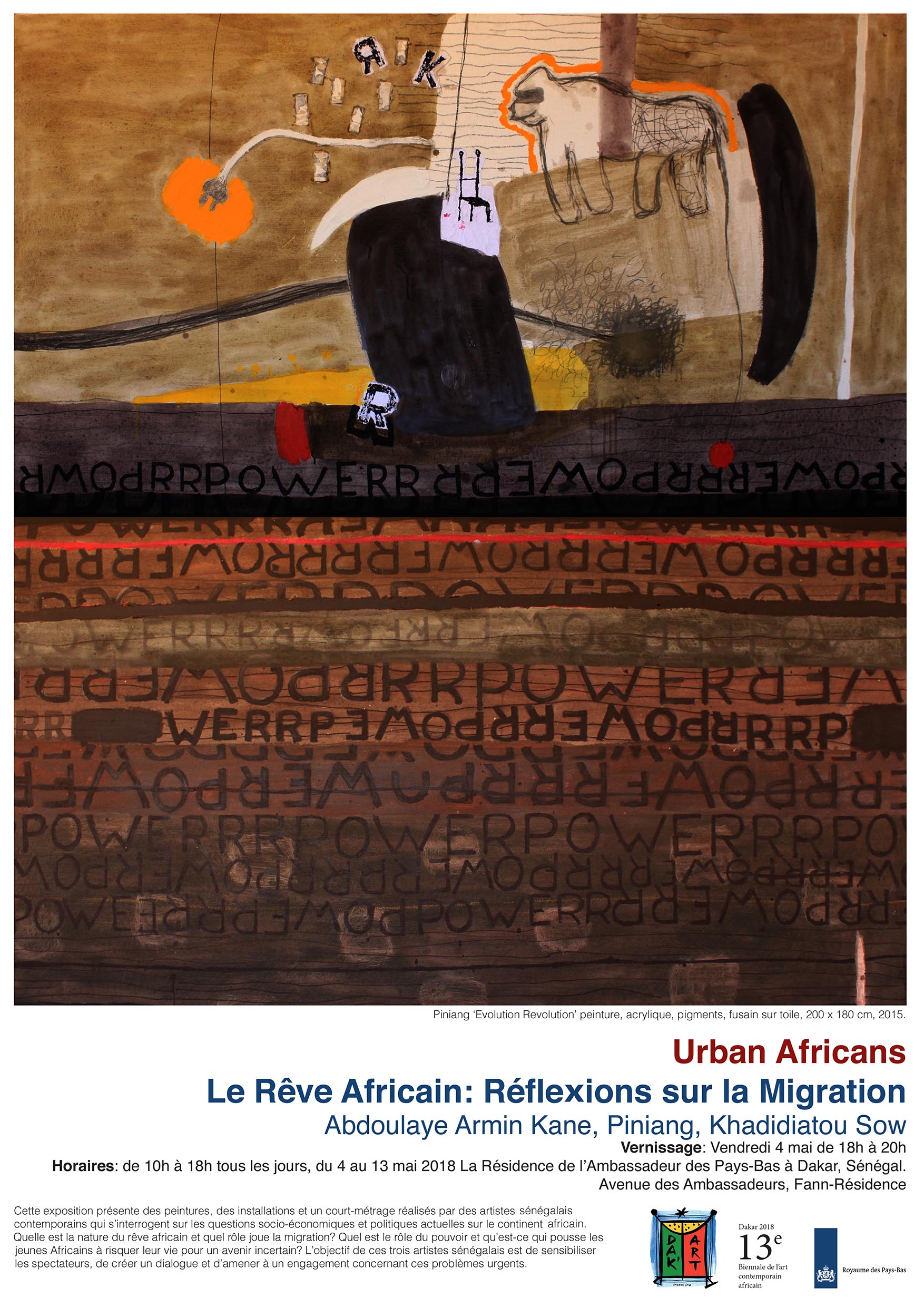 ‘The African Dream: Reflections on Migration’

This second Urban Africans exhibition took also place – like the first- at the Residency of the Dutch Ambassador in Dakar, Senegal. Featuring three Senegalese artists Abdoulaye Armin Kane, Piniang and Khadidiatou Sow. The exhibition was opened by Mr. M. T. Peters, Ambassador of the Kingdom of the Netherlands on May 4th 2018. The exhibition formed part of the OFF program of the biennial Dak’Art 2018. With thanks to the Dutch Ministry of Foreign Affairs for their support.

Piniang (1976) uses a variety of techniques; drawing, painting and collage. Buildings, animals, chairs, words and electric wires emerge as his work questions the city, with all its elements. These elements symbolise disorder and the lack of social responsibility shown by the Senegalese government. The word ‘power’ for example has many interwoven meanings: ‘Chairs symbolize political power through which people are manipulated. Cables and plugs stand for electric power which we always lack in Dakar and it’s ironic; all these young people migrate to have the power to exist.’

Piniang’s installation shows a scene of hands thrown up towards the sky from the sea, as the EU flag floats on the surface. Piniang: ‘The EU has programmes to stop young people from migrating and depicts people dying a terrible death in the sea as their logo. It is a bizarre reality.’ Piniang’s dream lies in Africa: ‘Recognition begins here. Our leaders think we have to follow the European development model, but this continent has its own pace and riches.’

Abdoulaye Armin Kane (1965) makes videos, installations and paintings with migration as a recurring theme: ‘Obviously, migration in search of a better life is as old as the world. The search for economic and social security is often the first motivation that drives people to travel. But people have other choices! The real power lies in the hands of the people…’

Kane’s work is based on the first-hand accounts he gathers from migrants. He is interested in the way they use victimization as a media campaign, with the aim of creating sympathy in the West and increasing their chances of political asylum.

Kane also examines the effects of inequality and the vulnerability of people, sometimes as victims of trafficking, as they move around the world. ‘In such situations, no one knows who is who and who does what because identities are borrowed or simply ‘lost’. I try to make the world face its moral responsibility and call on everyone to reflect on this humanitarian crisis.’

Khadidiatou Sow (1978) is an all-round visual artist. She paints, makes installations, costumes and films. Migration is also a recurring theme in her work: ‘I feel obliged to respond to this plague that makes young people get into a rubber boat and risk their lives to go to the West. They believe in a better future, but they are travelling into the unknown.’

In her installation, Sow shows the struggles of mass displacement. Fragile figures symbolising the intangible longing which drives them.

Her short film, Une place dans l’avion (2017) is about a surreal dream of the Promised Land. Inhabitants in Dakar hear a radio announcement that there is a plane to the USA with space for just 1 passenger. They all rush to the airport, fighting each other to be the chosen one.

Sow: ‘It’s burlesque, almost a cartoon, I wanted to show that Africa is very colourful and cheerful. Poor, but not miserable.’

Each day we organised debats and dialogues with the artists and groups. Among others: Dakar’s art academy students, ‘Guediawaye Hip Hop’ from Dakar’s banlieu, Dakar International school students and Dakar women’s group.

‘The African Dream: Reflections on Migration’ in the art section -Dak’Art Actu- of Senegalese newspaper ‘Enquete’ on May 8, 2018. 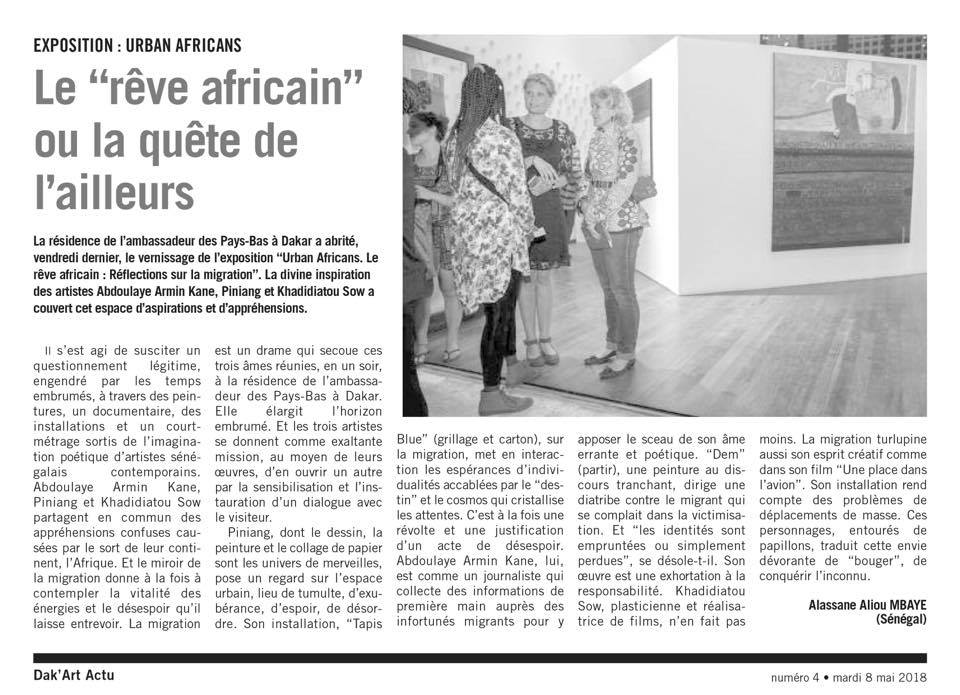 Dutch Art Academy (HKU) interns Jolien Wallis de Vries en Marieke Luthart made booklets after their research in Dakar. Illustrations are based on reflections on migration.