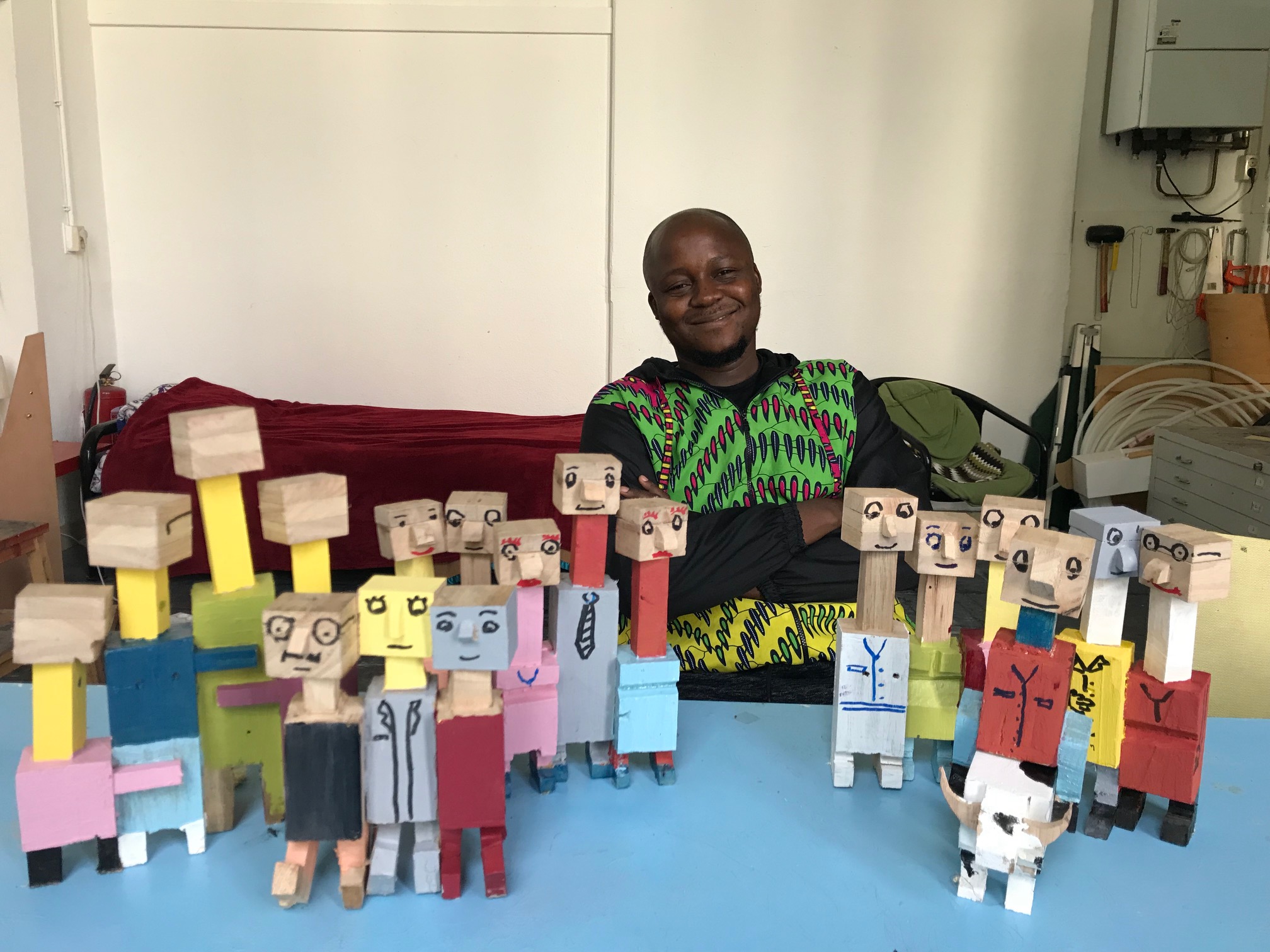 “I am a very emotional person and I can easily get carried away by emotions, like every human being. Unfortunately, many people forget sometimes that they are human”. 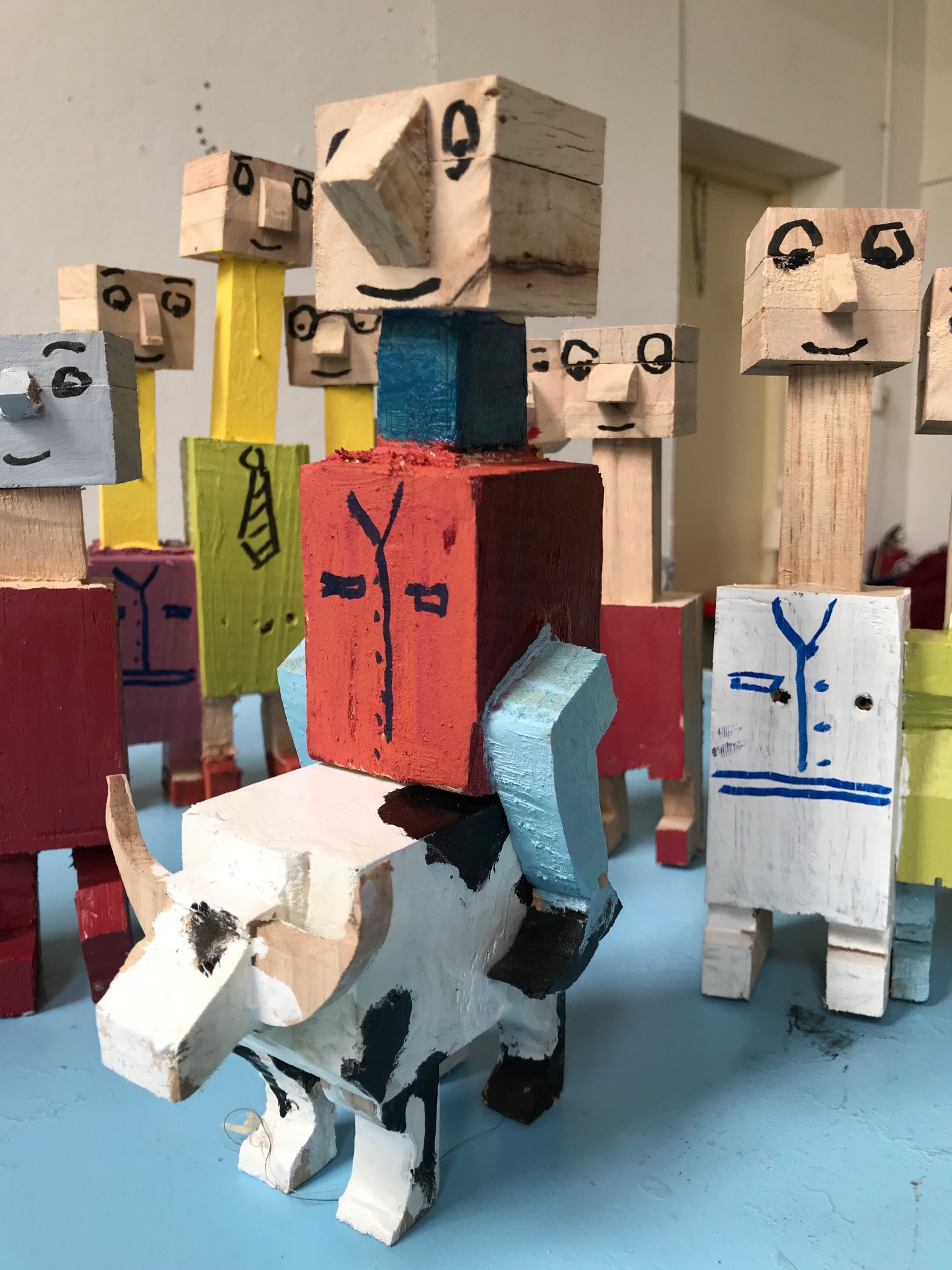 Abdulrazaq Awofeso creates simple forms so that his art is easily accessible and can provide relief to his viewers. His wooden figures for example evoke laughter, empathy and other recognisable expressions of human emotion.
Awofeso, was born in Lagos in 1978. He studied at Yaba College of Technology in Lagos and also lived in South Africa for 14 years although he now works mainly from his home country of Nigeria. His work demonstrates a strong leitmotiv; wooden sculptures of human figures, which he creates in all sizes, shapes and colours. Our conversation took place in the Thami Mnyele artist-in-residence studio in Amsterdam where he was surrounded by his wooden creations. 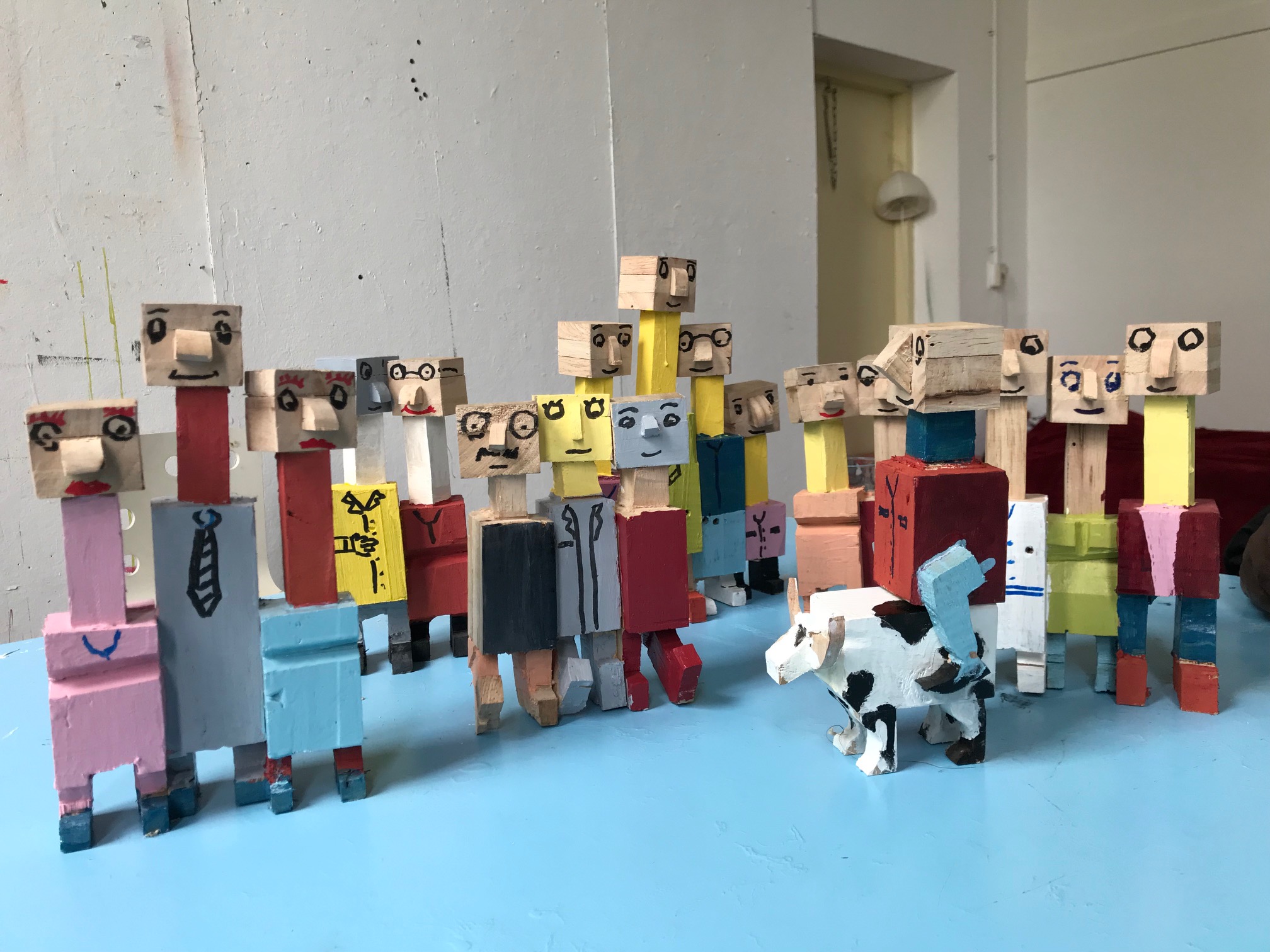 He stresses that the world seems to have forgotten the nature of what it means to be human and sees people merely as statistical entities. He hopes his work will remind us of the value of human warmth and interactions. Awofeso: “It is all about people, human beings! If you have a lot of my sculptures together, there are a lot of people staring at you. All of them are different individuals and have different emotional expressions, thoughts and appearances. You can’t ignore the humanness of them. There is no activity in my figures, they just stand and show their faces to the spectators. Faces are the first point of contact in which you can see (hidden) emotions. This is the first time I have glued my figures together and so they embrace each other. This human warmth is what the world needs more of”. 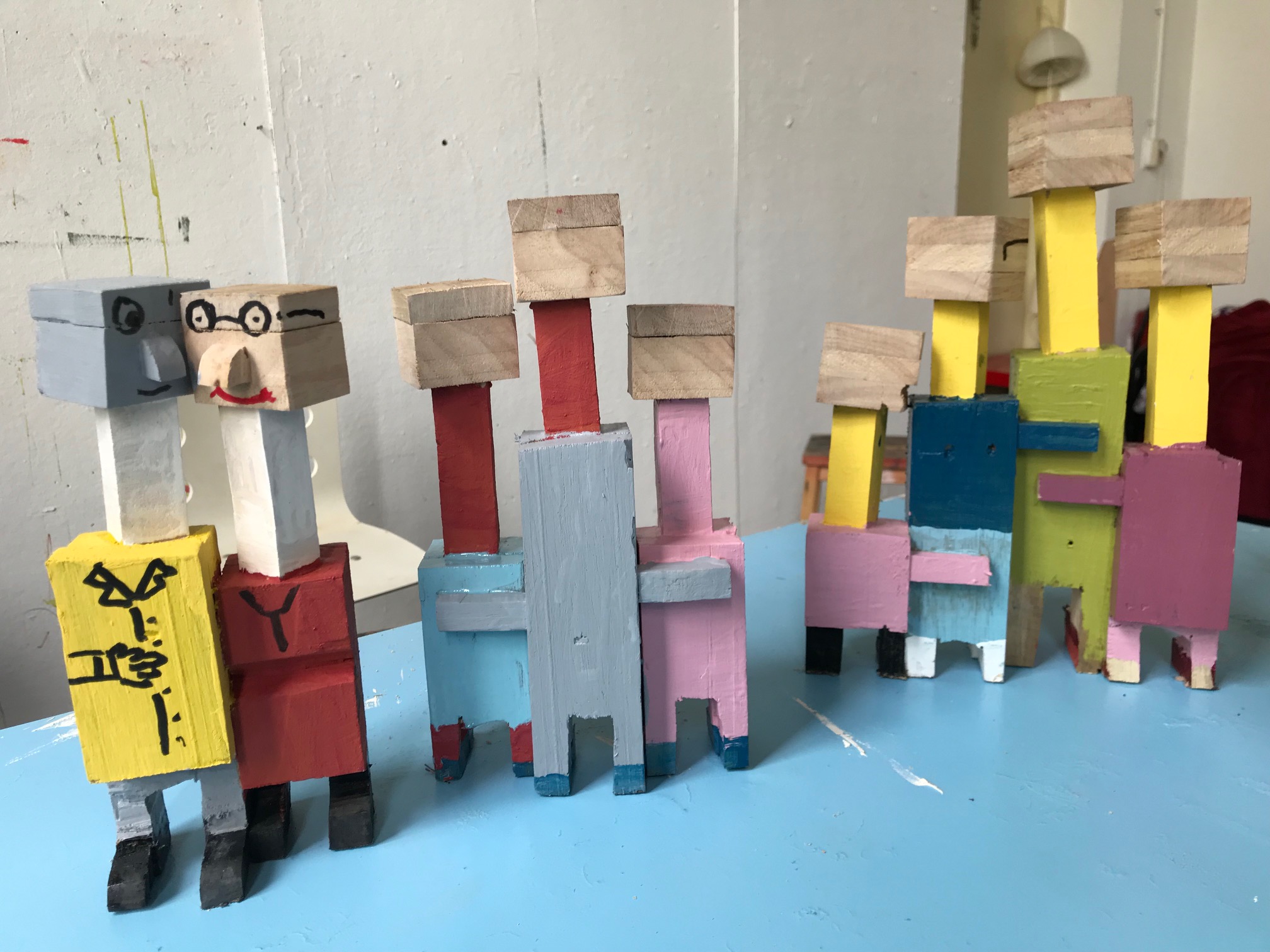 Awofeso doesn’t set out to portray his own personal emotions and experiences, but they are nevertheless a subconscious part of his work. “I use everything I see and experience in my daily life as a source of inspiration. Things I encounter, hear or read. I am interested in people’s reactions to their environment; when we talk about migrants for example, I ask myself: how do they cope with their new surroundings and with being illegal? What kind of human reactions and emotions pass through them? Migrants are often seen as faceless masses and it is important to Awofeso portray their individuality and human dignity. 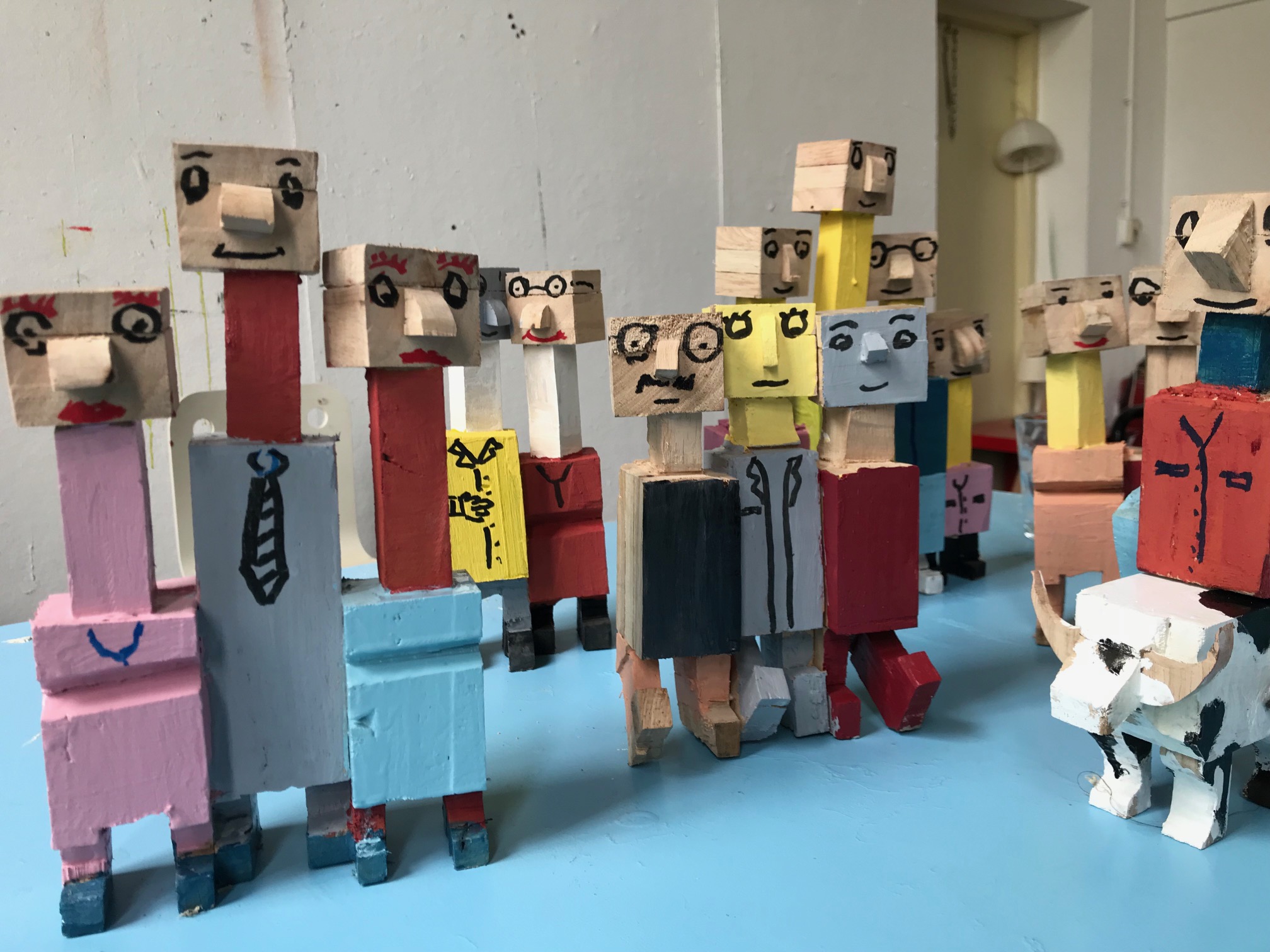 In his work he examines local and global notions of power and the complexities of political, social and economic systems. Awofeso stresses that everything is interconnected and migration is not simply the result of local conditions but of global systems of corruption and exploitation. “The slave trade in Libya for example, it is all the fault of international trade and I ask myself, is there no better way to deal with migrants than these cruel inhuman practices? It seems to get worse so I can’t ignore it”. He hopes that his artworks provoke people to reconsider their assumptions about the world they live in.
He is very satisfied about his residency at the Thami Mnynele Foundation in Amsterdam. When I ask him about his local working methods, he laughs: “I picked up all my materials on the streets! I found good quality wood and metal and started to work and experiment with it. I never thought the Dutch would throw so much good stuff away! If I had had an empty apartment, I could easily have furnished it with things I just found in Amsterdam.” He loves experimenting with different local materials, for example in Amsterdam he has been working with the effect of acid on metals. 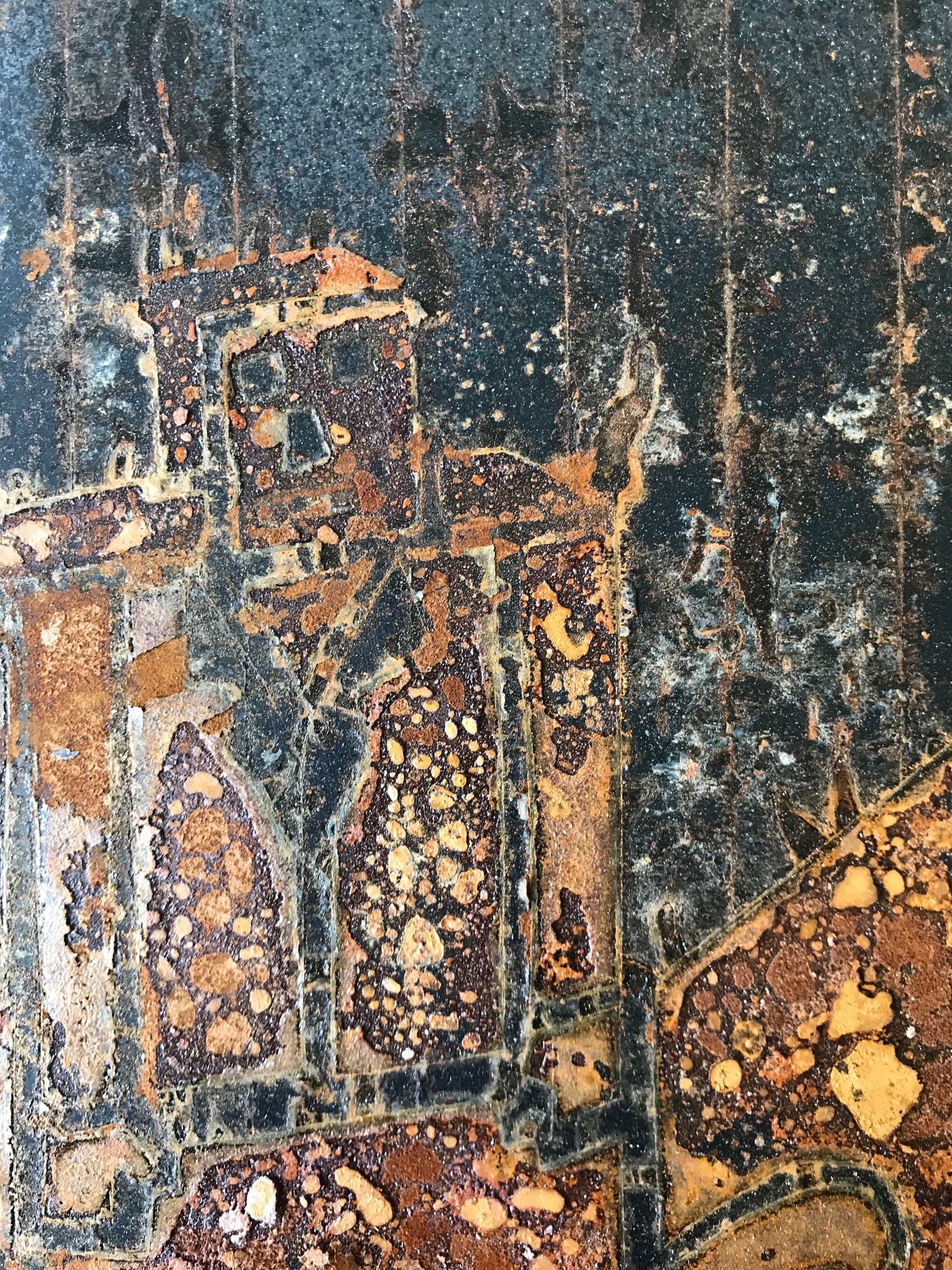 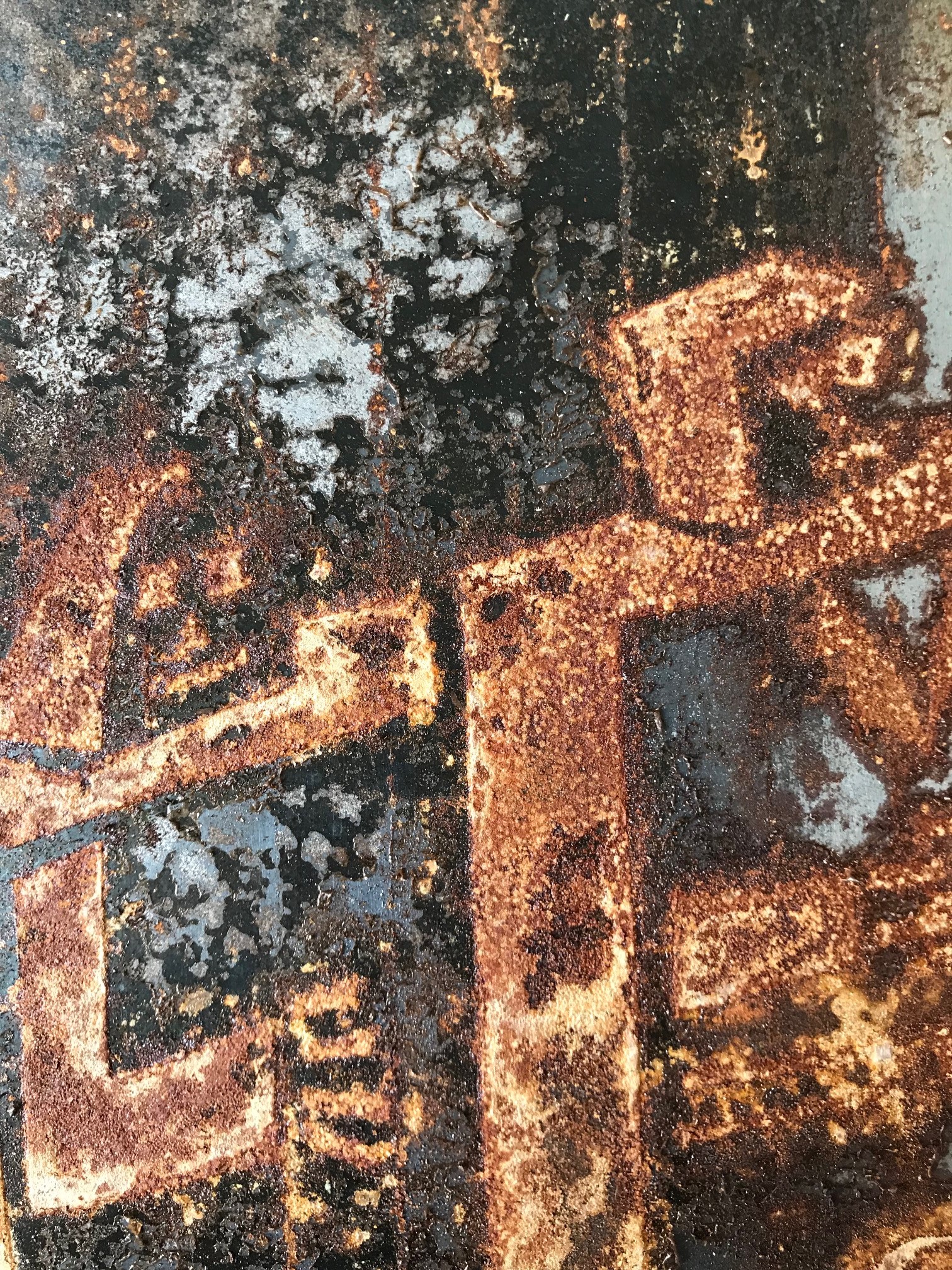 Abdulrazaq Awofeso has done residencies and expositions all over the world and concludes: “I have been drawing since I was a little boy and my parents encouraged me. I was lucky that art choose me. Creating is an inner need for me and gives me solace. I discovered that life is about self-healing, nobody else will heal you. All I want is happiness and to make the world a better place. Art functions as therapy; it makes me calm and happy”.

At the moment his work can be seen in AFRICAN METROPOLIS. UNA CITTÀ IMMAGINARIA, UNTIL NOVEMBER 4, 2018, MAXXI Rome

PS by Rob Perrée:  The first time I visited Abdul in the Thami Mnyele artist-in-residence studio in Amsterdam (1), the room was filled with pieces of wood and all sorts of other objects he had taken from the street. A number of metal plates lay in the midst of that apparent mess. They were rectangular and neatly cut to size. He had no idea what he was going to do with it. “I could not let them down.”

The second time I was there he experimented with corrosive liquids. He initially let the corrosion go its own way, creating abstract patterns and forms. Later on he would make figures or, perhaps better, suggestions of figures on them. The above images indicate that it will be an interesting experiment. The final outcome is still unclear.  Rob Perrée. 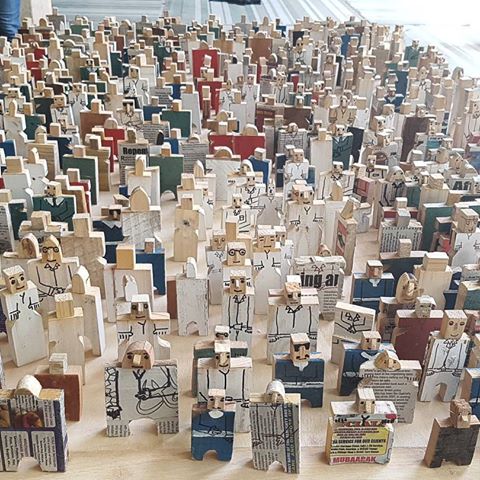 This article is published on: http://africanah.org/abdulrazaq-awofesos-wooden-friends/